When we pulled into London's Liverpool Street station we said our sad farewell goodbyes to each other in the knowledge that most of us would never meet again. I had invited all to my wedding in Germany but as the date had yet to be set, it was doubtful if few, if any could attend, they by that time being probably once again at sea after their leave was up (happily, three of them did manage).

My odyssey was however still not at an end. Before arriving at Rotterdam aboard the Weybank I had sent a radio-telegram to the Marconi depot at East Ham, London (where I would have to visit anyway for an end-of-voyage debrief). In it I had requested that they draw a certain amount of cash as an advance on my accumulated salary ready for me to pick-up on my arrival on the 26th April, a Saturday. I explained that I needed this advance to cover airline tickets (I intended to fly out of Heathrow in the afternoon) and that I would not be able to get to a bank myself as they (if opened at all) closed at the latest on Saturdays at noon (just a month later, all banks in the UK stayed closed all day Saturday).

I had only enough cash to cover a taxi from Liverpool Street to East Ham - an expensive business. When I arrived at the East Ham depot I noticed that they hadn't changed a bit since I had been away. They still kept visiting R/Os waiting in the waiting room like at the doctors. Instead of announcing "Mr. xxxxxxx please come forward" or something similar, the morse code for a certain ship's callsign blared out of a loudspeaker. Some mental retard must have at some time or other come up with this great idea. R/Os logging in at the depot before joining a ship obviously didn't know what their future ship's callsign was, having not yet been aboard her but the depot personnel did and sent it via loudspeaker accordingly (unlike the German Seaman's Record Book "Seefahrtsbuch", the British equivelant did not record the ships' callsigns). On the other hand the Weybank's callsign was GMHZ but since I had signed-off in Rotterdam, the only relationship I had with it now was purely sentimental. I did not belong to it nor it to me.

I announced my arrival and took a seat in the waiting room intending to play mind games with them when they morsed GMHZ over the loudspeaker - I decided I would ignore it and wait to see what would happen next. I quickly changed plan - I had been away at sea for a long time and the Kindergarten morse Spiel quickly got under my skin - I had a plane to catch. As soon as the loudspeaker started twittering away with the next candidate's call sign (it wasn't mine) I shot up out of my seat and approached the "bank-tellers" i.e. the Administrative Desk. This was where R/Os logged in or out and it was setup just like in a bank or airline check-in desk.

"We didn't call you, you'll have to go back and wait your turn"

"Listen, listen to me very carefully what I am about to say. I'm in no mood to play games. I sent this office a telegram a few days ago announcing my arrival today. In it I kindly requested an advance. What I want to hear from you right now is whether or not this office has complied".

"Cat among the pigeons" - I went ballistic when they eventually came back with an "all we've got in the kitty at the moment is...". It was now a case of "No, all systems will not be restored as soon as possible" as I kicked up such a fuss. In the end I got what I came for - where they got the money from I don't know as the banks had closed by then - maybe they passed the hat around amongst themselves. The debrief unsurprisingly never took place. My parting words were "In future, don't call me, I'll call you".

This rather unhappy occurance marks the end of my saga of the Weybank. With respect to Marconi Marine (MIMCO) I have no complaints (apart from my own experiences with East Ham depot and MIMCO's army style paybook "12 Pound a month pocket money for adolescents"). I never had trouble obtaining spare parts from their depots abroad and they let us get on with the job without any interference - even to the extent that if it was not for the "Marconi" logos on every piece of the equipment you could almost forget who you were working for.

Similarly with the Bank Line. At the time I sailed aboard the Weybank, Bank Line had one of the largest fleets worldwide, almost 60 ships. The vast majority of these ships were not built with crew comfort in mind and neither did they expend money on (in their eyes) unneccessary equipment. They were all tramp ships in the true sense of the word, as in the song "I've been everywhere, man, I've been everywhere". Most of them departed the UK or European continent only to return between one and two years later. Many UK shipping companies had regular runs between the UK and the Far East such as Ben Line or Blue Funnel or to South Africa (Union Castle), just to mention a few. The crews of such vessels could almost set their clocks to when they would return to the UK. A Blue Funnel ship round trip from the UK to Hong Kong and Japan, calling at many other ports on its way there and back took on average 130 days. Those officers who made a career out of it, sticking to the Bank Line must have been of different breed to put up with BL's long voyages. Many of them were married - how their marriages survived throughout the years is beyond me.

The Weybank was a "happy ship" - not a single bad apple amongst us to destroy our comradeship. She has long since, as we all do eventually, ended up at the breakers yard but in my mind she is as Mojiko, never forgotten. I salute the Belfast men (and women) who built her, they were better men than I. 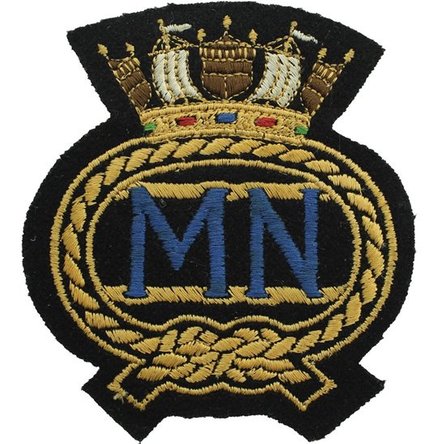 Don't speak to me of heroes until you've heard the tale,

Of Britain's merchant seamen who sailed through storm and gale,

To keep those lifelines open in our nations hour of need

When a tyrant cast a shadow across our island breed,

Heard the call of duty and cast aside their fears,

While cooks and stewards manned the guns on coffins made of steel,

They stoked those hungry boilers and stood behind the wheel,

They moved in icy convoys from Scappa to Murmansk,

And crossed the western ocean never seeking thanks,

They sailed the South Atlantic where raiders lay in wait,

And kept the food lines open from Malta to the Cape,

Tracked by silent U-boats which hunted from below,

They clung to burning lifeboats where the sea had turned to flame,

And watched their shipmates disappear to everlasting fame,

I speak of not a handful, But thirty thousand plus,

Some whose names we'll never know in whom we placed our trust,

They never knew the honour of medals on their chests,

Or marching bands and victory, glory and the rest,

The ocean is their resting place their tomb stone is the wind,

The seabirds cry their last goodbye to family and to friend,

Freighters, troopships, liners and tankers by the score,

Flew the proud red duster as they sank beneath the waves,

And took those countless heroes to lonely ocean graves,

Their legacy is freedom to those who hold it dear,

To walk with clear horizons and never hide in fear,

So when you speak of heroes remember those at sea

From Britain's Merchant Navy, who died to keep us free.

A Brexit is a Brexit and a shipping fleet's a fleet,

We are an island nation and each one of us must eat,

We cannot feed ourselves, our numbers are so many,

We carry not much freight today in ships, we have not any,

How is it done? You might well ask, how do we feed ourselves?

How do the supermarkets fill their cabinets and shelves,

With coconuts and mangoes and the best New Zealand lamb,

We do not live on Bara Brith nor joints of Wiltshire ham,

Nor Cheshire cheese nor porridge oats nor puddings black from Bury,

We can't survive on whisky and a smile from Mary Berry,

We must rely on shipping then from every foreign nation,

Or sixty-million bellies learn the meaning of starvation,

Foreign shipping, foreign flag with hieroglyphs upon it,

No merchant navy of our own and nobody to run it,

We still are most dependent on our friends across the sea,

Without a fleet no Brexit will protect our liberty,

For liberty does not exist for any island nation,

Which cannot feed its people without help and supplication,

Charter parties, rates of freight most strictly written down,

Mean nothing if there is not some allegiance to the Crown,

Allegiance? What's that you say? What is it that you mean?

That other nations all should bow and scrape before the Queen?

Of course I don't. Of course they won't. That is the point I make,

We need to build a Merchant Fleet - and quickly, no mistake.