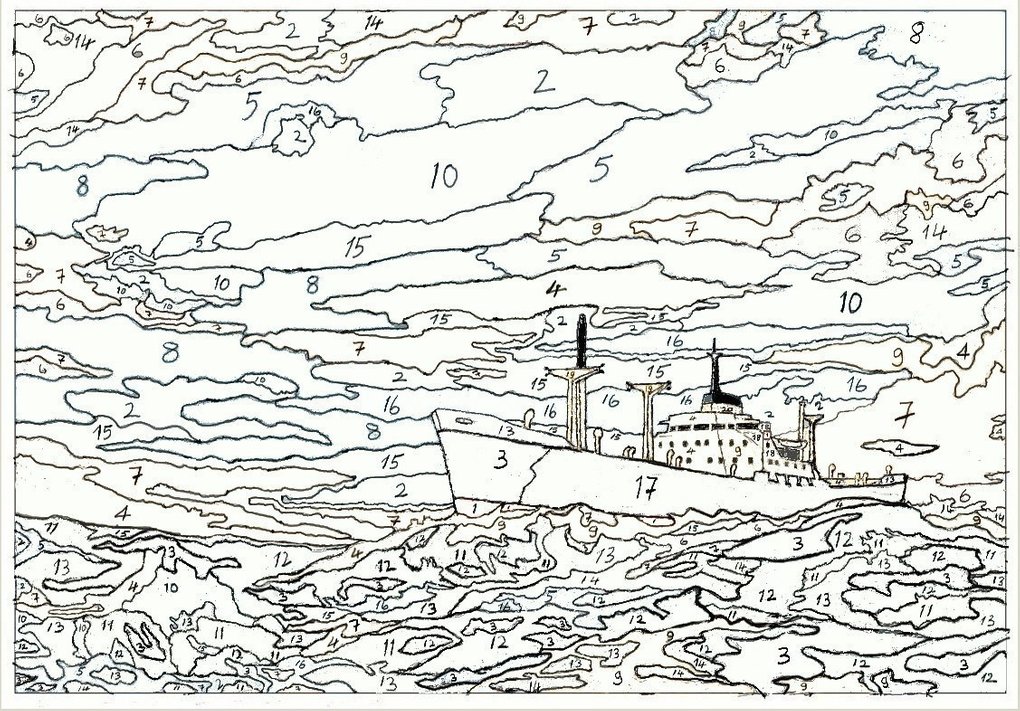 Template (for painting with Acrylic colours) 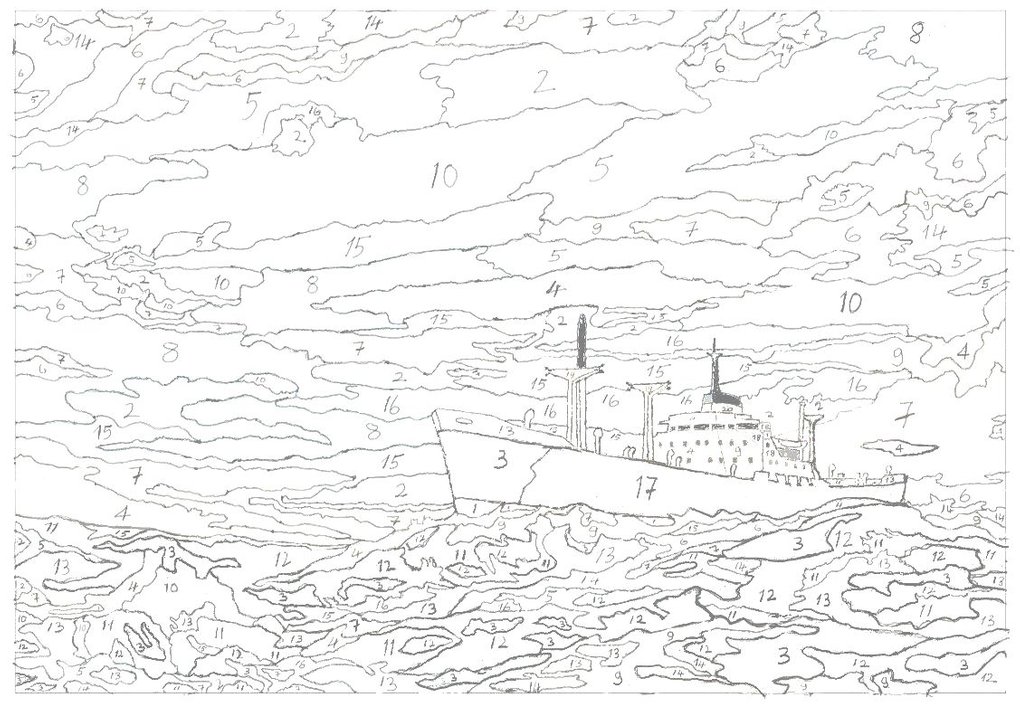 Template_Bright (for painting with water colours) 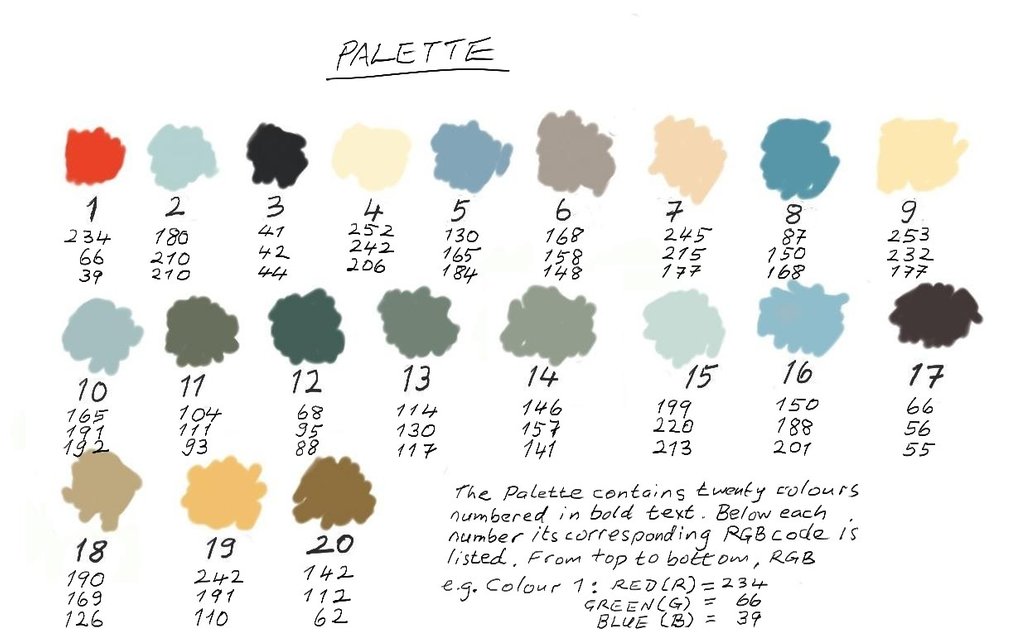 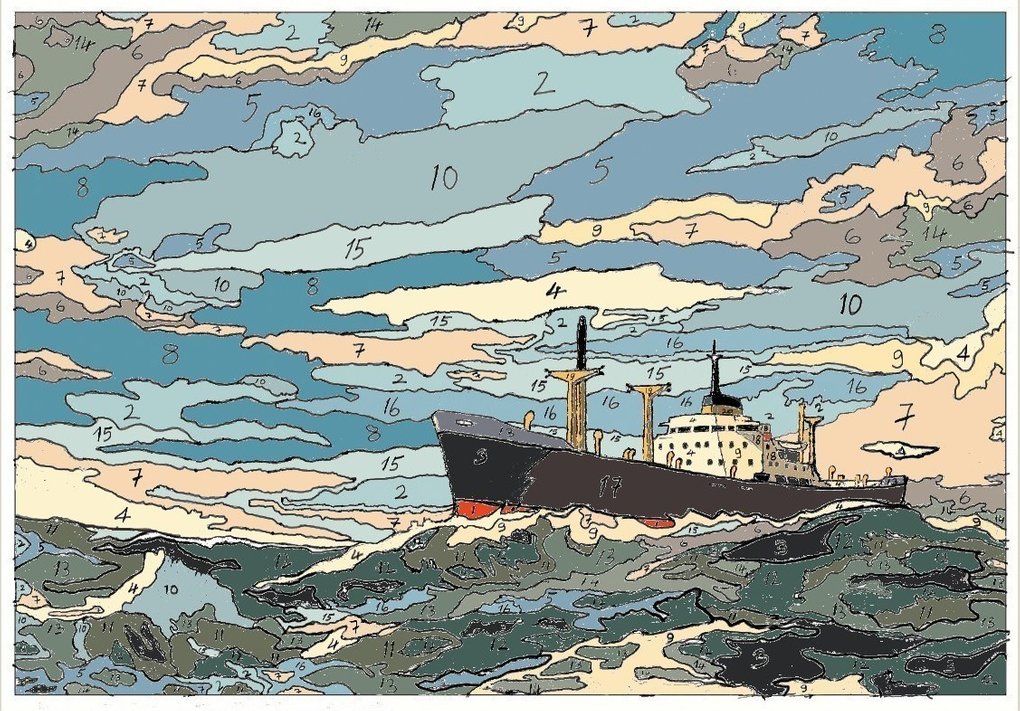 Colour Test made when making the PBN (don't try painting the template like this!) 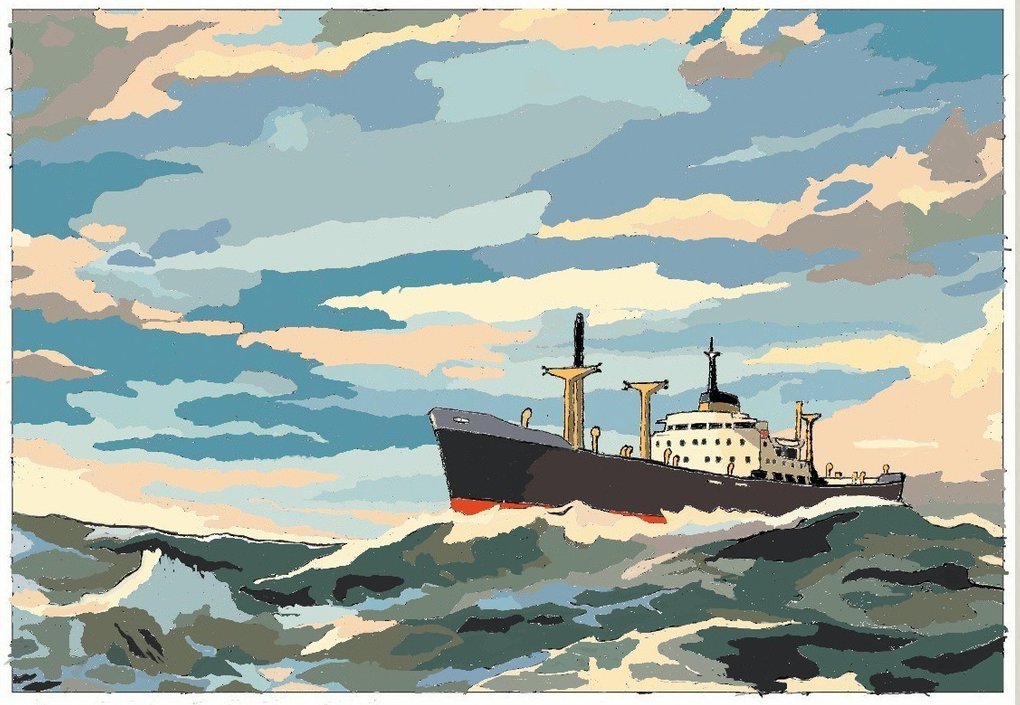 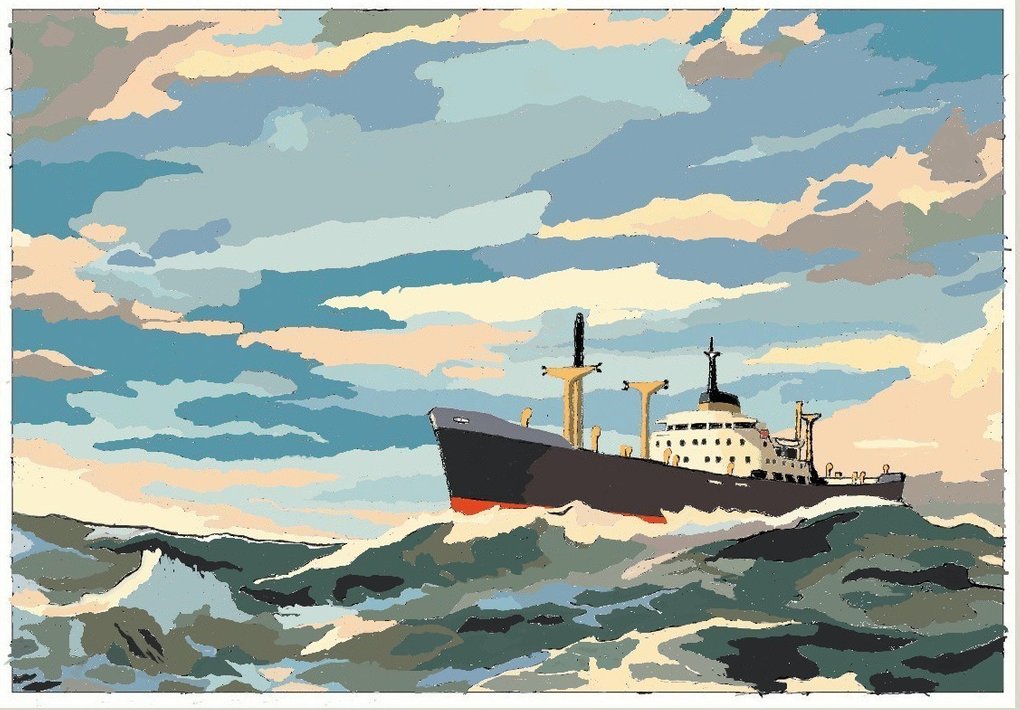 Painting By Numbers was the brainchild of Dan Robbins, an employee of a paint factory in the USA in the early 1950's. One day he read about how Michelangelo had trained his students in the use of a numbering system to aid in drawing and painting large murals etc. This triggered Dan's imagination and so he made some number system drawings of his own and then took them to his boss, the paint factory owner and asked him what he thought of them. His boss told him in words to the effect that they "looked like crap" but on second thoughts told Dan to try again but with a landscape drawing instead.

By 1955, Dan - and his boss who owned the factory and put up the money to produce the templates and paint had sold 20 million of their PBN painting kits!

These kits came with a stencil/template on which the outline of the drawing was printed usually in a light blue or grey colour. The template base was just hard cardboard but with the painting surface covered by a material that would not suck in the oil from the oil paints which accompanied the kits.

Depending on the size of the drawing and/or the subject - the kits came with around twenty or so little plastic thimble sized pots, each filled with a different oil colour and each with its respective colour number printed on the pot.

Most of these Dan Robbins kits (and those which were drawn by other artists that Dan hired to take the workload off himself) were basically simple but genial. The end product always seemed to somehow captivate the viewer.

Today, PBN kits (or Colour Pencil By Number or Fibre Tip Pen By Number, or, or..) are still very popular worldwide but beware. Many of the kits offered have elaborate drawings with numbers that would take weeks to fill testing anyone's patience and not only that - the number of oil pots included can be well over twenty or thirty but each pot has the same volume! Some of the colours you will only use once or twice whereas some other colour may be required to fill in large numbers of spaces - which is when you start panicking because you know that the pot is not going to give you enough paint to complete it's numbered jobs!

If you ever feel like trying out a commercialy offered PBN, choose one that that appeals to you but is basically simple - don't go for "The Last Supper" or "Mona Lisa" type extravagances. We all had to learn to walk before we could run. Also, don't buy an oil based kit for starters! Oil paint takes days to dry - once you have painted your first brush strokes you have to be continually aware not to come into contact with them when you are trying to paint your next strokes - wherever they may be on the "canvas". You will also have to clean your brushes with something like turpentine before chosing another paint colour. When you are finished (exhausted) for the day you will have to park your painting somewhere safe where the cat or kids can't get at it and the area is dust free.

With this in mind, buy an Acrylic based colour kit instead. Acrylic paints are vibrant and can be thinned with water. You can mix Acrylic paints together to make other colours (as you can do with any other kind of paints) but Acrylic
paint has the advantage that once it is painted on a surface, it takes only 10 to 15 minutes to dry but not only that - once the paint has dried it is water resistant (unlike water colours for instance). Another thing is that as long as the Acryl on your brush is still moist, to clean the brush just jiggle it in water and wipe it clean with kitchen paper towel.

All of the following "Oceangoing" drawings were drawn with the aid of a graphics program called "My Paint" and a Wacom pen tablet.
There are many graphics software programs on offer such as Photoshop or Coral Draw but these and some similar programs are not free of charge and have a steep learning curve when it comes to using them. "My Paint" is open source and free and can be downloaded from mypaint.org for either Microsoft, Apple or Linux operating systems. It has everything a freehand artist could wish for and unlike the afore-mentioned programs does not have a steep learning curve. Its website has a users manual which can be viewed on-line.
However, without the aid of a pen tablet such as Wacom, all of these programs would be useless. You cannot draw/paint any decent picture with a PC mouse!

My Wacom tablet i only 20 x 18.5 cm in size and its drawing/painting area even less, 15 x 9.7 cm. It comes with a USB cable to connect it to the PC and with a pen which looks like just a normal standard biro or pen but has two little control switches embedded on one side. There are no batteries involved. The tablet is powered from the PC via the USB cable, which also transmits pen position data to the PC.

You might think that by using electronics to draw and paint that somehow the PC program is doing the artistic work or magicaly enhancing what you draw/paint i.e. that it is not real drawing or painting that you are doing. I can assure you that when drawing or painting with the aid of a Wacom and PC, it is the same as if you were drawing or painting on paper or canvas. The GREAT advantage of this type of painting is that you don't have to buy paints for starters. Anyone who has painted in oils knows just how expensive a single tube of oil paint is. You don't have to clean any brushes either or have glasses of water or turpentine lying on your desk (to knock over) or rags to clean them. If you make a mistake when painting, just press the "back" key to get rid of it or paint it over (or erase).

Returning to the "Oceangoing" drawings, apart from the "Palette" and "Details" drawings they are all in 1:1 print size 39.76 x 27.73 cm (15.65 x 10.9 Inch), almost DIN-A3 size. If you want to print out any of these on a standard DIN-A4 type printer then just select "Fit to page" or "Print without margins" on your printer driver display.

If you choose to use water colours and standard printer paper then, once you have printed out the template you will have to lay it flat on a cardboard base and then tape it down along the borders with "Tesafilm" or "Cellatape". If you don't do this then the water from the water colours will cause the paper surface to become wavy while you are painting and once you are finished and the paint dries, the paper undulations remain!

Print out the "Palette" sheet and then check its colours against the colours of the same sheet shown on the PC. They should be the same or at the least very close to each other. I mention this because the printer driver of your PC's operating system (OS) has a great influence on how your printer will print out colour. I use mainly a Linux OS which has a printer driver called CUPS.  After printing out the Palette from my Linux OS the Palette colours on paper were markedly darker than those of the original on the PC although the CUPS printer driver was on standard settings. When on the other hand I printed out the Palette from a couple of my Windows OSs - the colours on the print-out were identical to the original. I had to experiment with my Linux CUP driver settings until I got the print-out colours right.

The Palette shows so-called RGB numbers under each colour but ignore these if you are painting on paper. (If you were painting with "My Paint" and Wacom you wouldn't neccessarily need these numbers either because you could "Colour Pik" with the Wacom pen).

Admittedly as this is not a kit the hardest part in trying to paint the "Oceangoing" on paper lies with the question "where do I get the Palette colours from?".

The so-called Primary Colours are yellow, red, and blue. No combination of colours can create primary colours, but primaries mix in various combinations to form all other colors. If you decide to go ahead then click on the "dummies" link below. It will explain all you need to know about which colours to buy for mixing and how to mix them to obtain the tone you require, in addition to lots of other information on the subject.

On the other hand to reduce the colour mixing process you could buy a commercial Acrylic paint kit such as the one advertised in the link below:

A final painting "Oceangoing_Tweaking" shows how you could enhance the painting - as an example I started to "tweak" the ship by removing the black border outlines of the fore masts, bridge and hull. By doing so however the painting starts to lose, at least in my mind, its PBN charm. I could continue "tweaking" the rest of the ship and then start tweaking the sea to enhance the wave formations, make them a bit more fluid looking etc. etc. but by doing so I would transform the painting into a "standard" (for a better word) painting.

Finally, with respect to My Paint, Wacom, Dummies or Schipper - the only contact I have had with any of them was by downloading the free MyPaint software, buying a Wacom tablet (years ago) and visiting Dummies and Schippers websites. In other words I'm not being paid to flog their wares.

To all of you who might try PBN, good luck - don't despair if it doesn't turn out the way you expected the first time, it happens to all of us but we learn by doing. Many a PBN buyer has got hooked into painting as a hobby by first trying out with a PBN!